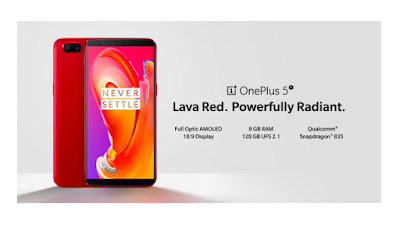 Chinese smartphone maker OnePlus has launched a Lava Red Edition of its OnePlus 5T flagship smartphone in India. OnePlus had launched this variant in China in November 2017.

The Lava Red Special Edition has the same black finish on the front panel just like the Midnight Black edition.The back panel and the sides of the smartphone have the special edition Lava Red finish.Other than the look and feel, the specifications remain same as the earlier variant. 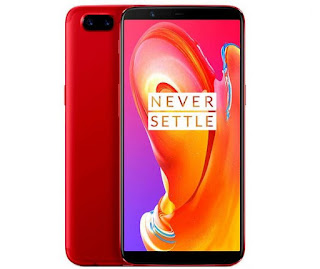 The OnePlus 5T comes with a 6.01-inch Full HD+ AMOLED display with a resolution of 2160 x 1080 pixel and 18:9 aspect ratio. The smartphone sports minimum bezels on the sides.The display is protected by a 2.5D curved Corning Gorilla Glass 5.
Coming to the hardware department, the  OnePlus 5T is powered by an Octa-Core Snapdragon 835 processor coupled with Adreno 540 GPU.
In terms of storage,  the OnePlus 5T Lava Red Edition variant will come with 8GB RAM and 128GB internal storage.
In terms of camera, the OnePlus 5T Lava Red Special Edition features a dual camera setup consisting of a 16MP primary camera with f/1.7 aperture and 1.12um pixel size, while the second sensor is a  20MP camera and a f/1.7 aperture. The front-facing unit is also a 16MP camera with a Sony IMX 371 sensor and f/2.0 aperture.
The OnePlus 5T Lava Red Special Edition is powered by a 3,300mAh battery and comes with Dash Charging support.

The OnePlus 5T Lava Red Special Edition variant comes at the same price as the regular colors. It is available for Rs. 37,999 and will be available exclusively via Amazon India sale starting from January 20th.
OnePlus said during the launch of the new Lava Red edition of OnePlus 5T, “Inspired by the dynamic nature of lava with colors that change under different types of light, the radiant Lava Red color shade is achieved through accurate combination of temperature, consistency and baking time with less than 0.01% variation.”
For the latest tech news , follow TECH FOR U on Twitter, Facebook, and subscribe to our YouTube channel.
Read More:  How to Download Dream11 app and play Dream11 IPL Fantasy Cricket Game