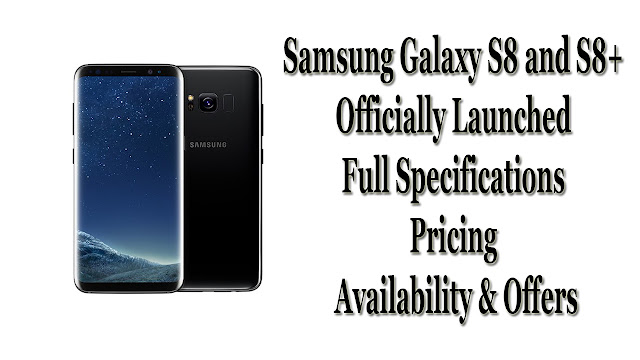 The Samsung Galaxy S8 and Galaxy S8+ are now officially launched by Samsung. The design and specifications of the flagship devices are already leaked. Today, Samsung officially confirm the price and availability of this flagship device.
Samsung Galaxy S8 and Galaxy S8+ both comes with edge screen. Samsung Galaxy S8+ is bigger device compare to Galaxy S8 but almost same internals. It comes with Midnight Black, Orchid Gray, Arctic Silver, Coral Blue and Maple Gold color options.
Samsung Galaxy S8 and Galaxy S8+ both device runs on Android 7.0 Nougat out of the box. Samsung Galaxy S8+ sports a dual edge 6.2 Infinity display with Quad HD+ resolution (2960 x 1440 pixels) and offering a pixel density of 529ppi.On the other hand, Samsung Galaxy S8 comes with 5.8-inch display with a pixel density of 570ppi.It powered by Snapdragon 835 SoC or the in-house Exynos 8995 SoC, Both these processors are manufactured using 10nm Fin-FET process and comes with different GPU’s. It includes 4GB of RAM and 64GB/128GB of expandable storage.
Coming to the camera point of view on the rear, there is a 12MP dual pixel camera with OIS and dual tone LED flash. There is also an 8MP autofocus camera with the f/1.7 aperture on the front for selfies. The Galaxy S8+ measures 159.5 x 73.4 x 8.1 mm while the Galaxy S8 with slightly smaller display comes measures 148.9 x 68.1 x 8.0 mm. By weighing 173 grams, the Galaxy S8+ might not feel that heavy considering its 6.2-inch display. With the bigger form factor, the Galaxy S8+ also accommodates a bigger 3,500mAh battery with fast charging support through wired and wireless chargers.

The Samsung Galaxy S8 and Galaxy S8+ Both the device lacks any hardware buttons on the front, but with a virtual button on the bottom with force touch technology. The fingerprint sensor and the heart rate sensor can be found the either side of the primary camera. It also supports Samsung Pay using the NFC and MST technologies. Connectivity options include Single SIM,4G LTE, Wi-Fi 802.11 a/b/g/n/ac, MU-MIMO, Bluetooth v5.0, ANT+, NFC, GPS, Galileo, USB OTG, Glonass and USB Type-C. There is also an Iris sensor to further enhance of the security on this device.
Other sensors on this device include Accelerometer, Gyroscope sensor, Barometer, Proximity Sensor, Ambient Light Sensor, Temperature sensor and Pressure Sensor. The Samsung Galaxy S8+ is also water and dust resistant, thanks to the IP68 certification. With the Samsung Connected app, the Galaxy S8+ can control all the connected products from Samsung and its partners. The Bixby virtual assistant is also integrated into the OS. Samsung also unveiled Dex dock to offer PC-like experience after connecting it to Monitor, Keyboard, and a Mouse.

There can be so much price in India, Samsung launched the Galaxy S7 at Rs 48900 and Galaxy S7 Edge at 56,900 last year. These prices were 15 percent higher than US prices. In this case, if the same pattern is followed this year than in India, Samsung Galaxy S8 can be launched at around 55 thousand rupees and Samsung Galaxy S8 + can be launched around Rs. 65 thousand rupees.
For the latest tech news & blogging Tutorials, follow TECH FOR U on Twitter, Facebook, and subscribe to our YouTube channel.