Why turning off SWIFT will not destroy the Russian banking system, and what you really should be afraid of

Table of Contents show
1. Why turning off SWIFT will not destroy the Russian banking system, and what you really should be afraid of
1.1. What is SWIFT?
1.1.1. How does SWIFT work?
1.1.2. What happens if Russia or any other country is disconnected from SWIFT?
1.2. Wrapping Up

This topic started affection in 2014 creating a concern to the peoples that if Russia is removed from SWIFT, what will be the consequences this topic is too much forcing to appear these days between the war of Russia and Ukraine. So we have prepared a well-detailed article to present before you that will answer your question and we will explain everything such as what is SWIFT, what will happen if Russia is removed from SWIFT and afterward consequences, so be with us and have a look forward to our article.

First, you need to understand that SWIFT is not a payment system. This is a kind of international language of banking communication, with the help of which banks from different countries, “speaking on different details”, can work with each other. Logically SWIFT is an organization that is known for controlling banking information systems while over the world under the jurisdiction of the United States and it follows American regulation.

How does SWIFT work?

In the 70s, when SWIFT appeared, information transmission channels worked, by our standards, very slowly. The SWIFT system offered a universal language that allows you to quickly receive information about who, where, and when a bank transfer is sent. There are such types of documents that are passed through SWIFT following the format of XML, which makes it convenient and easy to read.

Russian SPFS and other analogues of SWIFT

In 2014, Russia had created it’s own platform for financial transactions system due to heated sanction rhetoric, and hence today Russian banks do not need SWIFT to communicate within the country.

SPFS is an authority that had connected 400 backs till now.

Some of the banks that are connected to SPFS are Russian banks, several banks of the CIS countries, as well as banks from Germany, Switzerland, France, Japan, Sweden, Turkey and Cuba.

At the end of 2021, in that year 40 foreign banks were added. But compared to the number of SWIFT participants, this is quite a bit.

There are several more analogues of SWIFT in the world. It contains CIPS (from China).and INSTEX (from Europe) and some Iranian banks

What happens if Russia or any other country is disconnected from SWIFT? 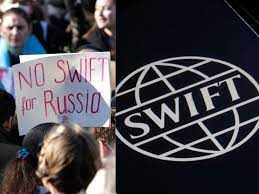 If any condition arises and Russia or any other country is removed from SWIFT, then its banks will no longer receive information about senders and recipients of international payments. Transfers will not stop but will become slower. In the event that SWIFT is blocked in Russia, all interested foreign banks will, in theory, be able to join the SPFS. In practice, this will either not happen, or the process will be long since the mechanism of the Russian system has not yet been debugged. Therefore, disconnecting from SWIFT will certainly have a negative impact on the speed of settlements and the quality of communication. But the negative will be a maximum medium-term. It will be felt until a full-fledged alternative grows out of SPFS, or another more modern system appears.

In 2014, SWIFT had already abandoned the blocking of Russia, because due to such sanctions, this global system could lose its monopoly. SWIFT is still a commercial product, and business interests for its participants are often higher than politics. The loss of the Russian market will be a big loss for SWIFT and for all other commercial and government companies trading with Russia. Therefore, some European countries oppose such measures.

What is really dangerous for banks after quitting SWIFT?

The real hysteria is around the blocking of correspondent accounts of Russian banks abroad. Now the ban on the circulation of dollars or euros entirely for all Russian banks is not being discussed. But if suddenly foreign currency accounts of Russian banks are blocked by foreign banks, then this will be the worst scenario. Blocking of correspondent accounts, for example, happened to banks in Iran and some banks in Belarus, which seriously hit their banking systems and economies.

Since the Central Banks of different countries do not have a technical way of communication, it is the banks that must build an international network and negotiate directly with each other. The ban on Russian bank accounts in foreign banks will stop all settlements for Russian businesses that work with foreign counterparties and vice versa.

Are there alternatives for international payments?

An alternative to the system of correspondent accounts can be the digital currencies of central banks (Central bank digital currency – CBDC). With the help of CBDC, central banks can begin to communicate and move the currency among themselves directly. In this case, the international network of correspondent banks will no longer be in demand. Technically, this is already almost possible, but there is no necessary regulation or any arbiter organization yet.

Sooner or later, this will happen, because a bunch of banks through SWIFT, created in the 70s, cannot work for centuries. Especially against the backdrop of the rapid growth of fintech companies. In this case, CBDC is a good alternative for international payments. In order for this to happen, an official international crypto exchange is required for the exchange of CBDC, and, of course, the political will of the Central Banks of different countries. When and if this happens, SWIFT and correspondent networks will become unnecessary. It remains only to wait for the precedent.

So we are at the end of our article and hopefully, we had explained everything from the root of regarding SWIFT. There would be many arising consequences if Russia leaves the SWIFT but ever since it had created its own banking system so it will empower the growth of the Russian banking platform. So hope you get it to the best for your search and stay tuned for our next article.